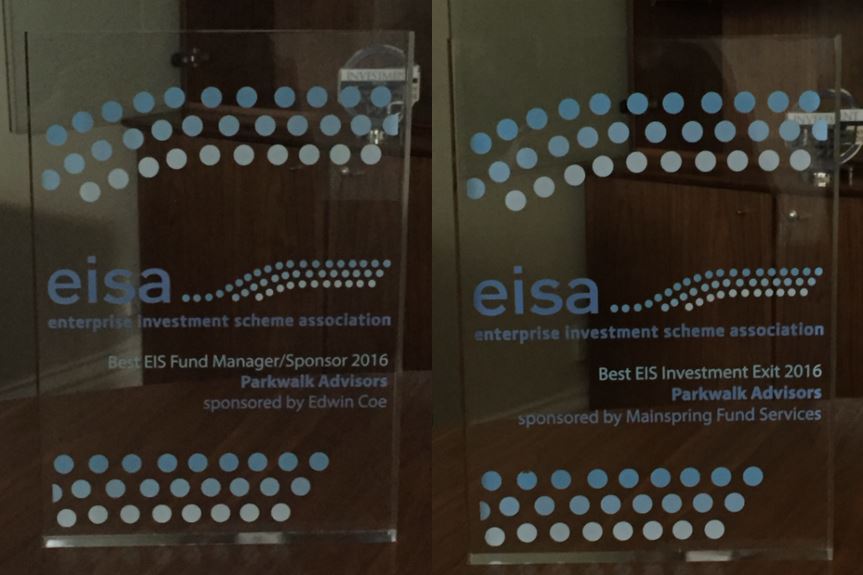 Parkwalk are delighted to have won both the ‘Best Investment Exit’ and ‘Best EIS Fund Manager’ categories at the EISA awards on the 1st February 2017. The awards recognised an extremely strong 2016 for Parkwalk. They were presented at the House of Lords to firms, advisers, companies and individuals that achieved outstanding performance in the context of the EIS/SEIS schemes during 2016.

On the ‘Best Fund Manager’ award, the judges said: ‘Parkwalk embody the essence of the true principles of EIS, and their work with the UK’s top universities to invest in knowledge intensive, early stage technology is quite simply transformational. They are a company that backed 36 financing rounds in 2016, deploying £40 million of EIS funds.”

On the ‘Best Exit’ award, the judges described the investment as a “shining example of collaboration, between Cambridge University and venture capital, where the interests of the university, founders and shareholders were aligned, and where clear objectives were set.”
“If there were text book exits for EIS then this would certainly be one”

This follows on from the 2016 awards, when Parkwalk was again recognised in the ‘Best EIS Investment Exit’ and the ‘Best EIS Fund Manager’ categories.

Further detail can be seen at the EISA website here.